what a dream!!! here end the first part of my trip in Europe, as i left Bulgaria, the country where you shake end from left to right to say yes (quite confusing sometimes XD). i ended with veliko tarnovo, maybe one ofthe most beautiful cities i have seen in europe! it could come from the crazy exeriments of fauve painters, or crazy poets imagination, or even from a fairy tale, with all those multicolor houses built on the cliff, dominating the river which circulate between monasteries and churches from the old ottoman city. above everything the huge fortress dominate everything. walking in the small paved streets, sitting near to the river with stary cats company is so peaceful.
but im a pilgrim on my way to india, to my dream, and im going to change continent!

now i put my first feet in asia after a night half in train half in train station sleeping, as nobody was able to tell me that i would have to change 3 times trains during the night included 4 hours wait... sometimes nobody speak english or french, its an amazing adventure to catch the right transports XD

anyway nor just arrived in istabul, i couldnt find the way to breath anymore, the magic athmosphere took roots everywhere inside of me. Majestic, strange, amazing, alive, historic, warm istanbul is everything at the same time!
the city is just a fairy tale everywhere, ever street is like a legend, seams like an illusion.
I was wandering around while i stopped on a public place, to listen to a live concert, on the warm stones, listening traditional music i had the view over ala sofia, the blue mosquee, and the hippodrome place. i closed eyes to feel istanbul athmosphere, mixture of smells from grilled corn, hot bread and narguile, of noises as the bells of the ice cream sellers with their huge pyramid of corns, and noises of daily life and the traditional music i was listening to, f colors and movements. I was in the center of everything! 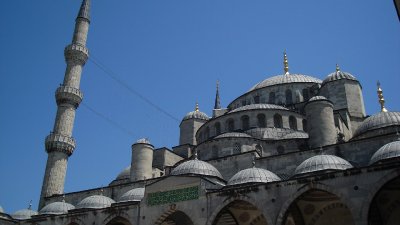 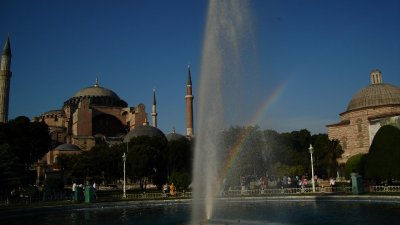 2 crazy funny tukish came to sat near, i smiled at them, i was pointed out on the map the points to see, and then they took my map and with big gestures showed me their favorite places. jamal, the man made lot of fun of my pictures, placed himself at the place of every statue on it, he imitates those one in very funny ways, we were laughting so much. he took pictures of me and his wife with crazy faces, we burst into laughts. we danced 3 of us like crazy the whole evening on the main place as the moon was rising in the sky. suddently it finished, i played a bit more jew harp and we said goodbye. sometimes speaking is not necessary XD just human warm! 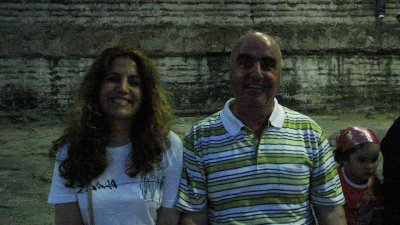 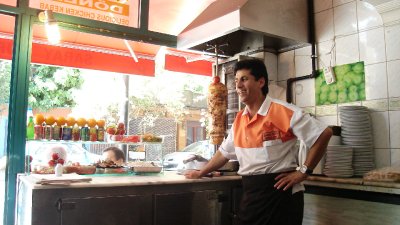 in the same way i met some turkish people in the train, the whole family was laughting all the time, there was a so strong complicity between all of them, they immediatly welcomed me, we laughts with the english turkish dictionary, i show then some magic tricks, card games, they gave me a simit bread (a bit as bagels), and i couldnt finished it i had already one other in hands! they were surprised i was not married, they immediatly offer me to do that in turkey!
they were from the country side and they made me understand that there were big differences between istanbuk city, modern, where girl behave like europeans, and countryside, still really traditional! 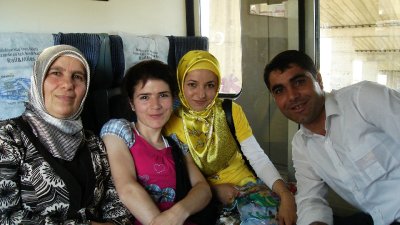 but human smiles and laughts are still here, this is universal!
human warmness is realy strong in turkey, i cannot walk 10 meters without beiing stopped by somebody for a tea, but its difficult to make a difference between real kindness or carpet advertisements or flirt.
i found a really cool hostel, and this morning i had the rightto a huge breakfast, prepared turkis for 8 euros a night. this is mostly corean place and had opportunity to speak with lots of them yesterday! i can have turkish tea whenever i want (5% of the upper brown part and the rest of water, and actually im sitting there on the 3rd floor, with sea view and just behind the blue mosquee in sultanamet!
im glad to have found it, cause i heard this morning like bad news. time to get iranian visa is 10 days, i was expecting to wait 4 days in istanbul. so 2 possibilities: or i apply via internet, and i get the visa in one day for 80 euros, or i go to the ambassy and wait for it here in istanbul, it would take 10 days and 50 euros, as 4 nights cost me about the price of intenet service, i guess i will stay in istanbul a bit more!
anyway i really fet in love with the city! and an amrican guy gave me a really cool idea! he left one year ago to land in trkey with his girlfriend, without return date and to be able to leave 4 months in istanbul, they offer volunteering in a youth hostel for food and bed, and they found a place where they needed english speaking persons, and did that for 4 months!
would be a cool idea for holidays anywhere, especially in istanbul!

so im going to check for the visa, and to make a turn around the city, in topkapi palace, and big bazaar!

Posted by hanso 00:52 Archived in Turkey