i will try to make a short sight seeing from the city i fell in love with, by showing my favorite places!
but at first i would show some pictures which reveal quite well the contrasts i was speaking about in the previous article!
hope you will enjoy as much as me! 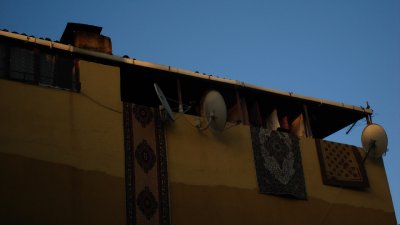 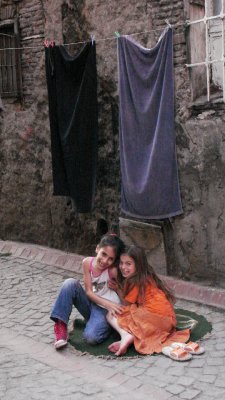 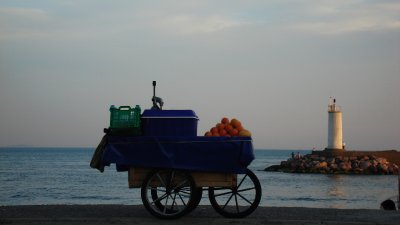 i will add the other one in the picture album!

some classics, but impossible to forget...

the blue mosquee, with this strange and magic athmosphere. i sat there 2 hours, fascinated by this mystic light coming from the stainedglass, and reflected by the blue ceramics inside. but carpets on the floor , the decorations give some warmness, and the feeling to be at home, maybe cause you enter in in socks and with a soft veil on head.
the most astonishing is that even if the mosquee witnessed some earthquake, the roof and the windows never felt down, never get damaged! the whole nights that sultanhamet archtect spent to think about how to built this roof so hight were successful, or maybe it is from some extraordinary forces!
but architecture is really mathematic, the main circle roof (dontknow english name, is supported by 4 smallers one, each one is supported by 1 half one, and each one of those, by 3 other one! 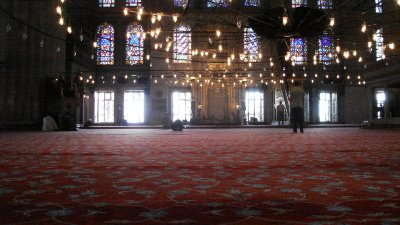 aya sofya, gigantic, 56 meters hight and only 5 years work and 11000 workers! gold roof, mosaics.... even lot of valuable objects has been stolen, it remains unbelievable! its not really incredible that nothing could equal this beauty during several centuries! mehmet had even transformed it into a mosquee, so you can see the mihrab inside under the marie mosaic with the child and several times a day the muezzin call to the pray! 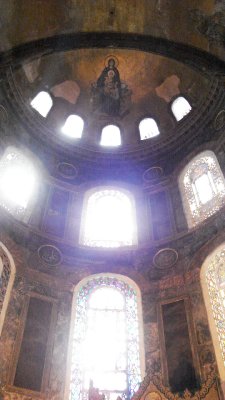 the bazaar is as well the istanbul i dreamt about, so exotic, a labyrinth of streets more colorful one than the other!
i got lost several times inside, and one time i was so tired that i took a tea with hassan the carpet sellers, one month younger than me, that s strange to think that we were not so different, but our lifes were totally the opposit after speaking more than one hour in his shop!
but the best parts for me are the animal bazaar were you can be heal by those worms who live in swamps and drink blood, or where your future can be read by pigeons!
there are as well the bookshops, with pyramids of books that are not edited in france anymore, in everylanguage, stray cats sleep on the whole!
you have as well the spice bazaar, mixtur of colors and smells, not really authentic any more but pleasant to see! 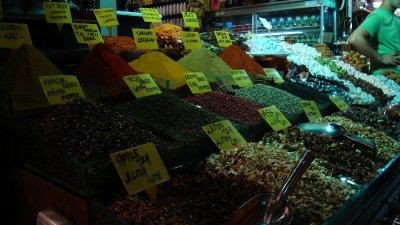 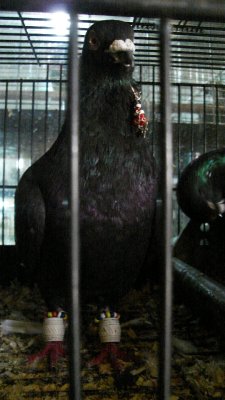 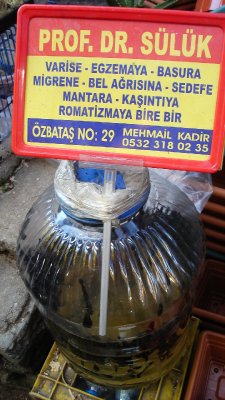 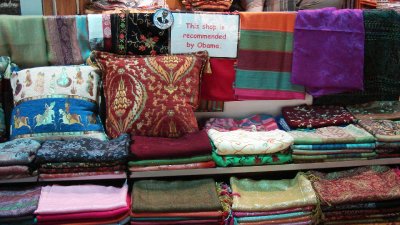 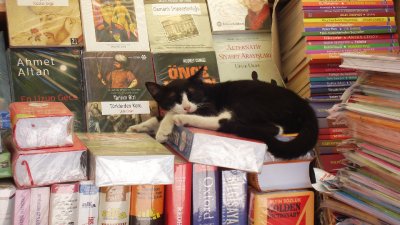 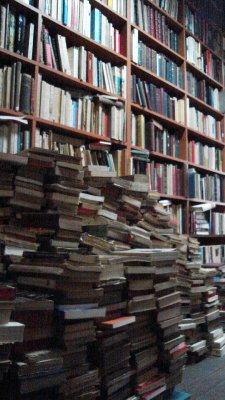 water front where you can play backgammon, fish, shot balls with weapons, eat grilled fish bread sitting in the middle of a group of old women.... 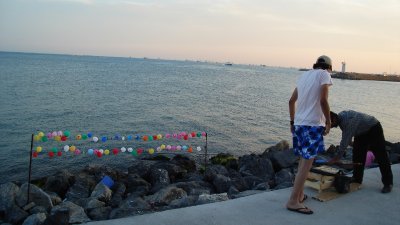 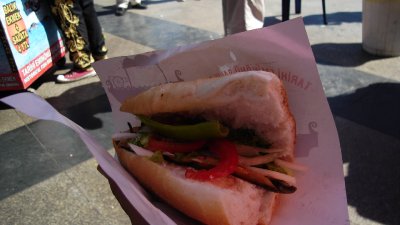 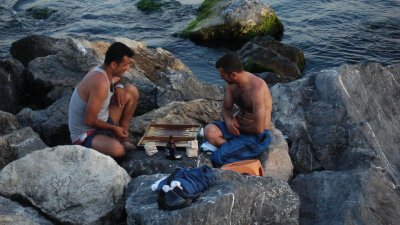 i went today to the other side of the river, to taksim square and different palaces, but i didnt like it that much, in old streets very modern shop are trying to attract the crowd, just when you get a bit out of the main streets, you can find small markets and nice places. and i heard several time aznavour in shops

so those last days have been quite busy! i visited the whole day, and to avoid crowd and warmness(40 degres) i went to sit for a while in different mosquee i crossed on my way. so peaceful!
and i started to find some routine here

every morning i went to see cesim, he is kebab cook on the way to iran ambassy, he offer me sliced fruits, mini kebap, and tea, then o got out to visit, and i came back on evening to speak with maggie, from australia, 7 months travel around the world to follow all F1 races, and sheng from south corea, mehmet the receptionist and several other person met during the stay!
and we drink tea all the time, thats incredible how the turkish tea can be tasty, i became addict and cannot have 2 hours pee autonomy YY
we liked to see the moon rise from the mazing view on the bosphor from the last floor, in turkish the reflect of the moon over the water is called yakamoz! having a word for such a beautiful event is really cool

cause the moon is orange when she rise, i had never seen that before! 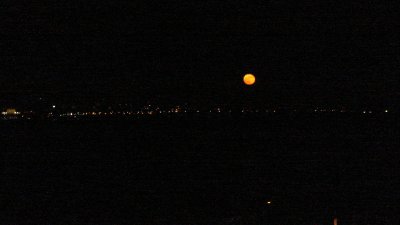 however im gonna leave tomorrow evening to catch a night train to ankara, i got the iranian visa in one day, guys from the ambassy were really kind and helpful!

now im gonna meet cesim, to have a narguile as he finished working. turkish people i met have at heart to welcome visitors as much as they can, thats really incredible, but tourism is growing and as in croatia it could change in several years, would be a pity YY

Posted by hanso 08:09 Archived in Turkey

very nice comments about ISTANBUL. I love it too. SO nice pictures . please take another ones .
bye Anne SO

Hey, tried sending you an email but I think I have your addreess wrong it kept bouncing back.
I wrote:
Dear Sophie,
it was wonderful to run into you today. It was a nice touch to end my wonderful day, to meet a traveler so enthusiastic and so excited and so knowledgable. I wish you luck in your travels. I hope to find myself on the road as soon as possible. Wish I could decide on a path, some kind of a pattern. I am thinking south america first

anyways, good luck on your travels. I looked at the site you gave me (franceindia.travellerspoint.com - I am wondering is this your friend's site or yours? )
I hope to see more pictures from your travels and keep in touch just in case if our roads cross each other.

if you can send me an email I will give you more information to contact me.
GOOD LUCK!! your traveling eye is very beautiful!