kharanaq, the desert and Yazd

There are some kind of experiences that zou live just one time in a life, some opportunities that verz few people have the chance to live. I guess i grabbed one those last days.... i slept in a desert with the skz as onlz roofXD

I left 150 kms from yazd, in a 4.4, with a group of travellers from all around the world who have more incredible experiences one from the other.we were circled bz the rocked mountains, passing head bz the window to enjoz the wind cause outside its around 45-50 degres. We will stopped in the last village on the waz to buy goat milk, wait just the time the farmer milked them and we entered the desert XD 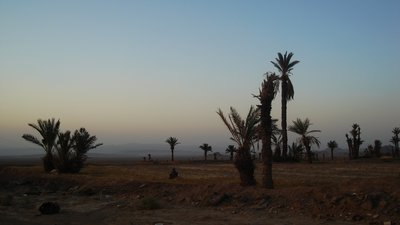 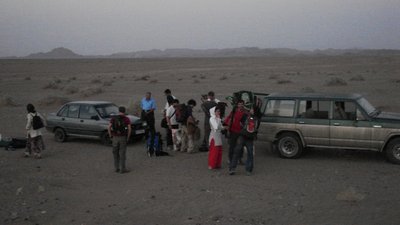 At the first sand hills,we stopped the car, take the backpacks and after half an hour walked we found the perfect place to stay, everzbody run around to find wood, and the sun set... light is plazing on the sand, we start firewood and cooking on it. A so cool meal that some animals, jealous, will come to visit us, as the big scarabs reallz strong to roll pieces of food with their back legs, but so funny when they try to land after a flight, or as the scaring and huge scorpion-spiders with a knife back poisonned. 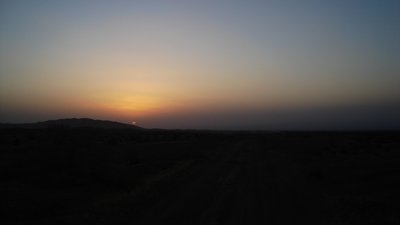 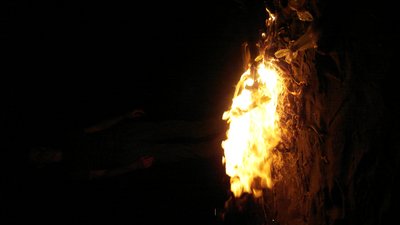 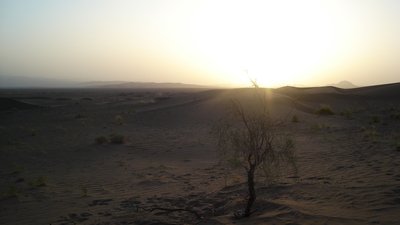 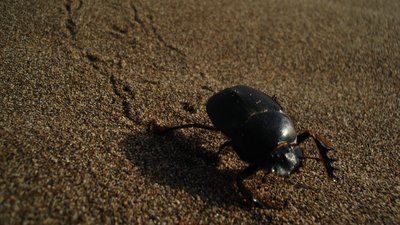 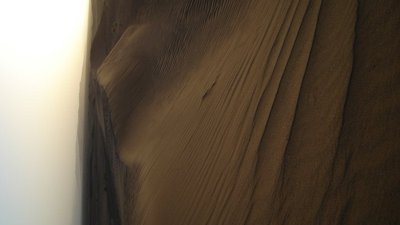 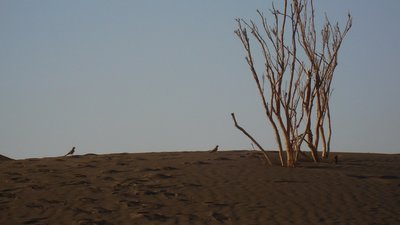 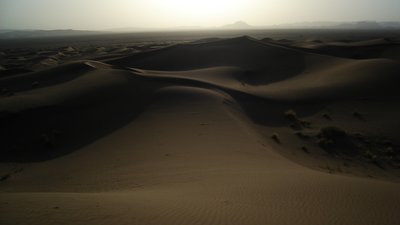 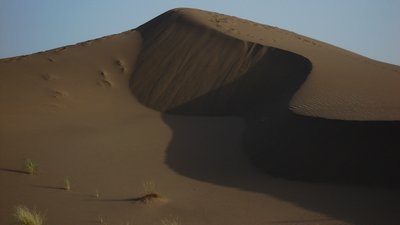 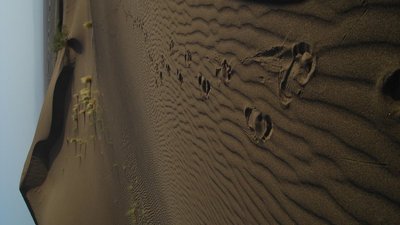 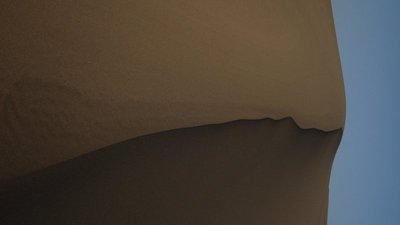 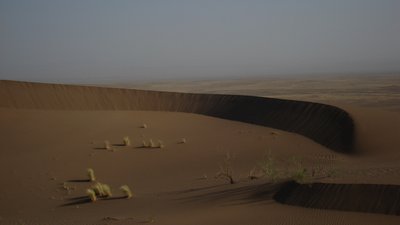 On evening one by one, we lied down and look at the sky, i forced mz eyes to not close, to admire all those stars, comets, the moon start becomingred and set, the stars turn slowly around the north, mz imagination let me feel that i flz to them, the floor go up, up and im soon gonna touch the skz, and i fell asleep... Lied there, between earth and sky, i feel like one with universe, found my place. On morning i have been wake up bz the sun rise, i go around to have a long walk, just imagining that im the first human to walk here make me laught.

Finallz time to go, at around 9am, its impossible to staz longer, sun istoo hard, im all red XD i will stay tonight in Kharanaq, a village where there are more goats than inhabitants XD the citadel, and the labzribth of streets between houses, all made with sand, grass and water, around 4000 yearsold, is gonna be back to the nature, buteverywhere we can still see rests of human work, as some oven, tables, prints... this ghost old city, that some artists and architect i met make plans to transform it into an art pole, seams to be like a pact between human and nature. just take a look at Siavash Ezdani website, young iranian, in deep fusion with his country his picture eye for architecture and landscapes is amazing, he is involved in the citadel project as well, www.sephotographs.com. I will climbed on the highest roof and watch the sunset from there, magic.... 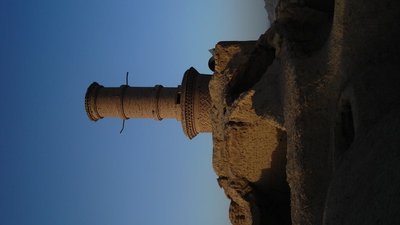 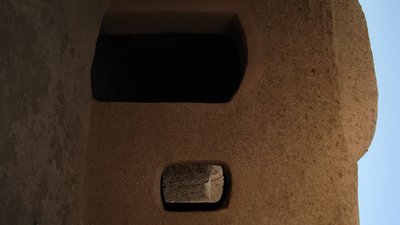 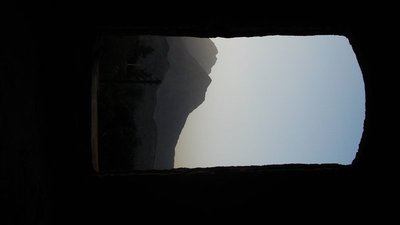 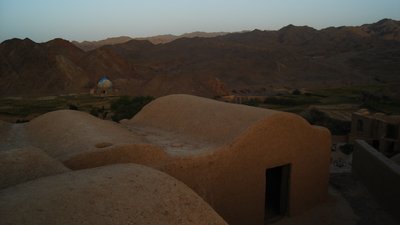 I will be back to the old renovated guest house, to cook creps with the french couple, and onion soup, we will have a reallz cool diner and then watch a movie, projected on a linen we fixed on the sand wall. At around we wentto the roof and fell asleep there under the sky. 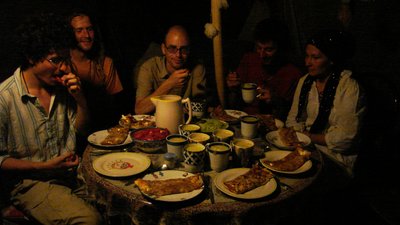 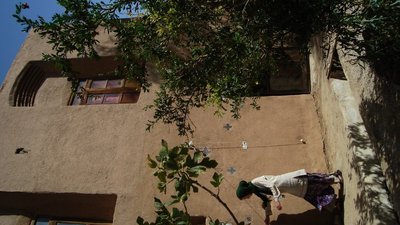 Now im back in Yazd. Its afternoon,the city is sleeping cause outside its around 50 degres, impossible to do anything... everybody will wake up at around5 pm and life is gonna start til late in the night.
Its nice to walk in this very old city, especiallz in the old town or in the bazar, both of thoselaces are so anachronic that its not that difficult to imagine that im in the 14th century when marco polo pass by and traced the silk road. Those sandy walls and streets should have seen so many explorateurs, so much history, so much memory are printed in Yazd... And its reallz amaying to see how human reach to adapt to his environment, and for centuries, this kind of living in an desertic area evolved with the time to adpat to the new ages... we will just remind the wind tower, replaced bz electric cooler, and the deep holes, replaced by tap water. 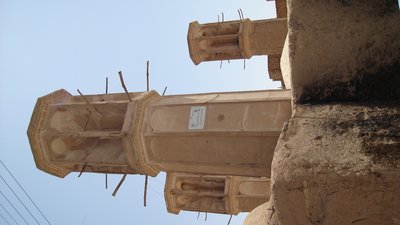 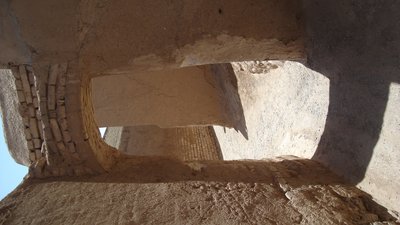 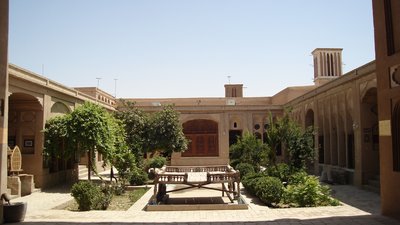 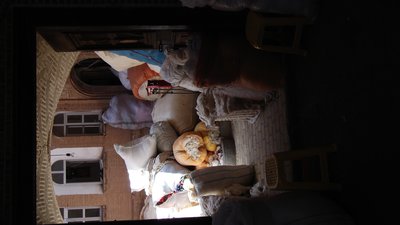 the iranian bakeries, always hot flat bread, for less than 2 euros cents, around 250 RI, they will offer me one bread after i took the picture there XD 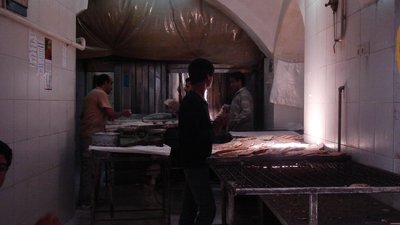 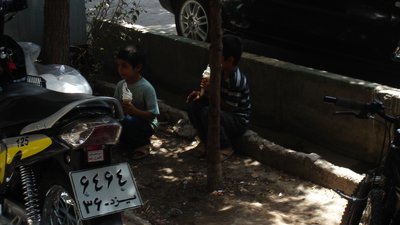 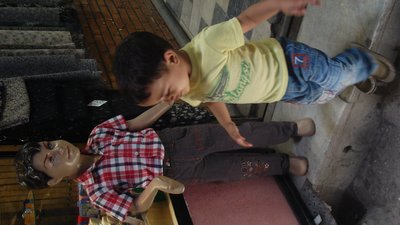 one of the addictions i got in turkey and i cannot get rid of it: tea.... everywhere at anytime! 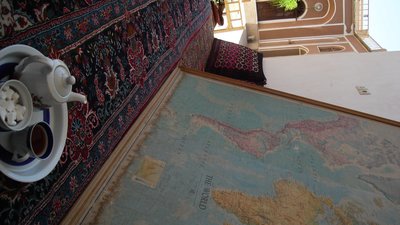 I will reallz have a nice road trip to go to yazd... atthe bus terminal in esfahan, i will buy a ticket for 1 euro, around 4 hours trip... i decided to take a "mercedes" bus. Opposed to the volvo, the mercedes are really old and dont have any cooler, you never know when they leave and when they will arrive! Usually i dont like buses, prefer much moretrain, bus this was reallz special XD Waiting at the train station, an iranian offer me to share his lunch, he was peeling tomatoes, cucumber, opening chease and flat bread, and he served me a glass of carbonated milk, on the sidewalk in front of the bus! He will bring me til inside the bus and manage to make me sit near to a young and verz nice iranian woman. Both of them couldnt speak english but we spent nice time, on the sidewalk or head bz the window, to get funny faces with the wind... we got fun cause her hijab all dark, and very long as all women here,flyed everzwhere with the wind, and she will offer me this flashy yellow scarf before leaving, and i dont leave it anzmore XD 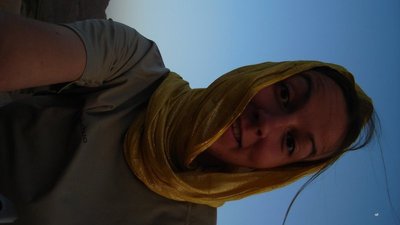 I think i will skip shiraz from my way, its not at all a city for backpackers, too expensive, no bus to persepolis or not onall the way, and i want to take the train, dont like buses, and no connection there, i saw enough mosque, garden, bazar... i want to be in india, really much, and time is passing really fast. I think i will take the first night train, today or tomorrow to bandar abbas, and take a boat to dubai from here!

Posted by hanso 00:44 Archived in Iran